Curve fitting is a numerical process often used in data analysis. Its essence is to apply a certain model (or called a function or a set of functions) to fit a series of discrete data into a smooth curve or surface, and numerically solve the corresponding parameters, thereby obtaining the relationship between the coordinates represented by the discrete points and the function. Curve fitting can help us understand the internal connection between data and predict the trend of such problems. In the practice of data analysis, most of the curves or surfaces that need to be fitted are nonlinear, so computer programs are required to obtain results.

The curve fitting has been widely applied in many areas, particularly in nearly every sector of statistical analysis. For examples, various lines and curves fitting in image processing, vibration and noise data processing in mechanical engineering, prediction of financial and sales data, the quantity of drug inhibitor on the induced cell change, the concentration of medicine and time, the efficacy of medical treatment and treatment duration, competition between species, etc. Curve fitting can apply to help us better understand many of these problems. In addition, in the field of structural finite element analysis, various nonlinear material parameters are obtained by parameter fitting from test data. In the electromagnetic analysis, the core loss parameters are curve fitted from the test data between power loss and magnetic flux density.

Here is an introduction to the types of curves that are often encountered in data analysis, including linear and nonlinear. Of course, we know that most models in curve fitting are nonlinear. The CurveFitter from WelSim already supports the fitting calculation of these curves.

The straight-line y=A+B*x is one of the simplest regression models in curve fitting, where x is the independent variable, y is the dependent variable, and A and B are the parameters to be fitted. Its main goal is to find the general direction of data concentration and data growth.

The polynomial y=A+B1x+B2x2+……+Bk*xk is a commonly used model in various engineering areas, where x is the independent variable, y is the dependent variable, the order number k is often between 1–9. When the order is 1, the polynomial becomes a straight line. When the order is greater than 1, the model exhibits nonlinearity. The higher the order, the more complex the curve can be represented. However, higher-order polynomials require more test data points to get accurate solutions, and it also results in expensive computation. In practice, an appropriate order should be chosen according to the data source and target problem.

The commonly used sigmoidal curves are symmetrical and asymmetrical types, which are also called 4-parameter and 5-parameter logistic regression functions. The mathematical expressions are y=D+(AD)/[1+(x/C)^B] and y=D+(AD)/[1+(x/C)^B]^M respectively, x is the independent variable, y is the dependent variable, and A, B, C, D, and M are the parameters to be fitted. Depending on the values of parameters, the shape of the curve may be a monotonously increasing exponential, logarithmic, or hyperbolic curve, it may be a monotonously declining curve or a sigmoidal curve. It requires that the value of x cannot be less than 0 (because the exponent is a real number). Because of its versatility, sigmoid has also become one of the commonly used curves in scientific research or engineering.

The popular hyperelastic models include Arruda-Boyce, Gent, Mooney-Rivlin, Neo-Hookean, Ogden, Polynomial, and Yeoh, etc. The independent and dependent variables are strain and stress, respectively. According to different hyperelastic models, the curves could be entirely different. In the finite element analysis, due to the diversity of hyperelastic materials, it is difficult to directly have the material parameters from the manual or literature, but the mechanical test data of those hyperelastic materials can be obtained from experiments. Fitting these test data can give us material constants for the successive finite element analysis. Since the mechanical test data has multiple deformation types, it is necessary to calculate and fit the stress-strain curve at various deformation types. Interested readers can get more information from CurveFitter’s user manual.

The loss of magnetic core material has some classic models such as p=KffBm²+Kc(fBm)²+Ke(fBm)^{1.5} for electrical steel, and power ferrite p=Cmf^XBm^Y, where Bm is the independent variable, p is the dependent variable, f is the input electromagnetic frequency, Kf, Kc, Ke and Cm, X, Y are the parameters to be fitted. The latter is also known as the Steinmetz model. Similar to the hyperelastic curve fitting, the core loss curves may need to fit multiple sets of test data at a time.

The steps to use CurveFitter are as follows:

1) Select the curve equation to be fitted from the toolbox

3) Check the input test data in the chart window.

4) Click the check button to check the test data (optional). A pop-up dialog box will prompt the status.

5) Click the Solve button to perform the numerical calculation of curve fitting. If the solution is successful, the parameter fields will automatically display the fitted values, and the chart window will display the fitted curve.

6) So far the curve fitting calculation has been completed. If you would check the shape of the curve with different parameters. You can adjust the value of the parameter field and click the update button.

In curve fitting, it is best to choose a function model based on the shape of the curve. A different fitting function results in different precision and parameters. We need to choose the best fitting function according to the optimal principle. It is also important that the number of given data points and the range of data points also affect curve fitting. Due to the error of the fitted data, it is necessary to check the fitted curve and parameters after calculation. We also need to minimize the influence of model errors and measurement errors on curve fitting.

Finally, the operation video is attached for your reference. 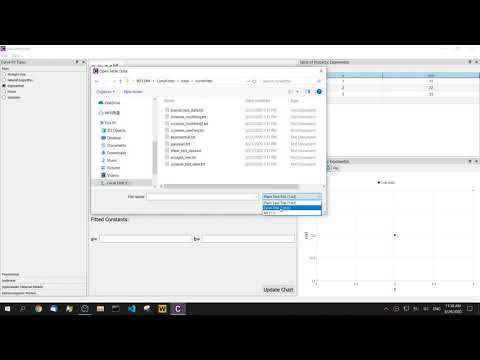